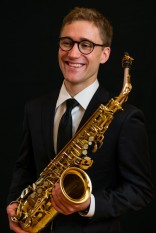 Among 40 new works, in 2017 he premiered Guggenheim-winning composer Felipe Salles’ double concerto, Sagrada Familia, with Dutch saxophonist, Arno Bornkamp. He made the world premiere recording of Stacy Garrop’s Quicksilver with the UMass Amherst Wind Ensemble in 2018, to be released on MSR Records in 2019. He has built recital programs spanning classical, jazz, and folk traditions, including a crossover program he performed with pianist Nadine Shank at the 2017 Edinburgh Fringe Festival. These have culminated in an ongoing recording project scheduled for release in 2020.

Jonathan also enjoys a vibrant chamber music profile. He has performed at Chamber Music Northwest and in Carnegie Hall’s 21st Century Ensemble. As co-founder of The Moanin’ Frogs saxophone sextet, he has toured internationally and recorded an album for Teal Creek Music. The Admiral Launch Duo, co-founded by Jonathan and harpist Jennifer Ellis, commission and premiere new works for harp and saxophone nationwide. Their album, Launch debuted in 2018 on Albany Records.