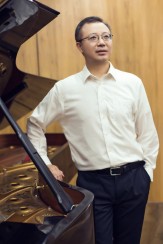 Dr. Du Huang currently serves as Professor of Piano at Luther College in Decorah, Iowa, where he has been on the faculty since 2001.  Huang has presented solo performances at the Grosser Saal of the Konzerthaus and the Brahms-Saal of the Musikverein in Vienna, Salle Gaveau and Salle Cortot in Paris, Shanghai Music Hall and Beijing Music Hall, and numerous concert venues in Czech Republic.  His performances have been broadcasted by radio stations in the United States and abroad.  Huang also performs frequently in the Unison Piano Duo with his wife, pianist Xiao Hu.  They have presented piano duo recitals at Carnegie Hall Weill Recital Hall and Merkin Concert Hall in New York City, and performed abroad in Austria, Brazil, China, Czech Repblic, Japan, Maylasia, and the Philippines. Their performances were featured on Iowa Public Television and Minnesota Public Radio.  The duo has also commissioned and premiered numerous new works for the piano duo medium.  Unison Piano Duo has issued recordings on the Innova, MSR Classics labels in the United States, and the Yangtze River label in China.

Huang holds a Guest Professorship with the Wuhan Conservatory of Music in China. He has served as a piano faculty member at Saarburg International Music Festival in Germany and Shanghai International Piano Festival and Institute in China.