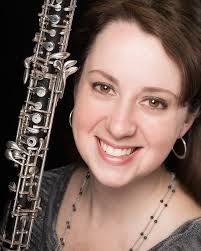 Pamela Ajango is Professor of Oboe at Butler University. Additionally, she holds  a position of the 2nd oboist/English hornist with Indianapolis Chamber Orchestra and performs regularly as substitute with the Indianapolis Symphony Orchestra.

Ms. Ajango was previously a full-time freelance musician in New York City, where she performed with many esteemed ensembles, including the New York Philharmonic, the New Jersey Symphony, the Orchestra of St. Luke’s, the Orpheus Chamber Ensemble, the American Composer’s Orchestra, as well as for Broadway productions and commercial recordings.

She is co-founder of the SONOS Chamber Orchestra of New York and is a founding member of the Circle City Wind Quintet.

Ms. Ajango has served as an educator for the Manhattan School of Music, the New York Philharmonic, the Montana Summer Symphony, and Midori and Friends.

She maintains a large private studio of oboists in the Indianapolis area, and frequently coaches student ensembles at area schools.

Ms. Ajango studied with Malcolm Smith, former principal oboist of the ISO, completed her bachelor’s degree at Boston University, under the tutelage of Ralph Gomberg and  her master’s degree at the Manhattan School of Music (Joseph Robinson), principal oboist of the New York Philharmonic. She is also on the faculty of the University of Indianapolis.